Ana Morales, touched by the magic wand of art

It is said that Ana Morales was born touched by the magic wand of art, although she owes much of what she is to having had the privilege of learning and meeting the great masters of flamenco. Find out more about her roots in this post on our blog.

Dancer, choreographer and director of a dance company. Born in Barcelona in 1982, she began her dance studies in Barcelona at an early age. At the age of 16, she moved to Seville with a scholarship from the Andalusian Dance Company (CAD) for three years. Her training also includes instruction from masters such as Rafael Campallo, A. Granados, Isabel Bayón, Juana Amaya, Eva Yerbabuena, Andrés Marín, among others. It is said that Ana Morales was born touched by the magic wand of art, although she owes much of what she is to having had the privilege of learning and meeting the great masters of flamenco.

Ana Morales made her debut in 2000, under the direction of Antonio "El Pipa", in the show "Puntales", which took place in the Maestranza Theatre in Seville as part of the Flamenco Biennial. A year later, she joined the Compañía Andaluza de Danza, with whom she toured, for four years, different theatres and national and international festivals.

In 2005, her dance was featured in two films: Iberia by Carlos Saura and ¿Por qué se rubtan las patitas? by Álvaro Bejines. She also participated in the Festival de Jerez in the show Triana, el nombre de la rosa by Javier Latorre; and in Asimetrías by Andrés Marín's company. He was even a soloist in Javier Barón's Meridiana in 2007.

Own productions
Three years later, in 2010, he returned to the Jerez de la Frontera festival with his first production, De sandalia a tacón, which was well received by critics. As a soloist she continued in her second show, Reciclarte, at the 2012 Flamenco Biennial, where she showcased the concept of reusing in her four costumes made from materials such as paper, plastic, metal and burlap.

Between 2013 and 2016 she participated as a soloist with the Ballet Flamenco de Andalucía. Since then, her growth has not stopped. In 2015 she presented her third show Los pasos perdidos, and in 2017 her fourth work as a soloist called Una Mirada lenta at the Teatro Central in Seville. In 2018 he premiered Sin permiso, canciones para el silencio during the 20th edition of the Bienal de Flamenco de Sevilla , at the Teatro Lope de Vega, a show where art, singing and flamenco are mixed with more modern elements and language. An intimate show dedicated to the absence of her father where Ana Morales reveals her feelings.

Ana Morales at the Flamenco Biennial of Seville

Co-produced by the Seville Flamenco Biennial, Ana Morales took advantage of her confinement to work on her latest show, En la Cuerda Floja, where dance, flamenco and live music intermingle to reflect on the world of dualities.

Dancer and bailaora, Ana Morales has been able to play with her own duality, offering a different show, moving away from the conventional and delighting her audiences with her new forms of art. 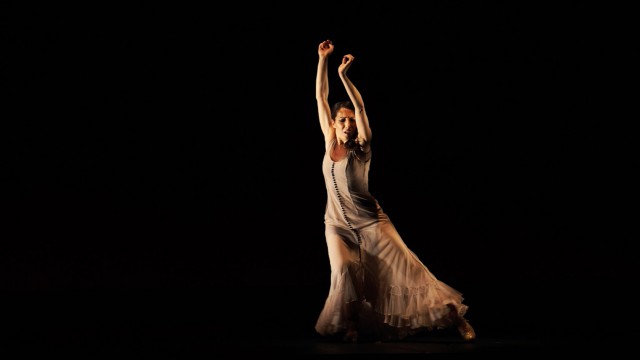