She is one of the most renowned dancers on the current Spanish dance scene, an artist in constant learning, teacher and choreographer. We meet her in this post of our blog.

Rafaela Carrasco is an important flamenco dancer and choreographer who was born in Seville in 1972, from a very young age, flamenco art runs through her veins. At the age of 12 she was already teaching sevillanas to pay her way through the dance academy. Since then, she has dedicated her life to dance.

She breaks the mould because her aim is to rethink, investigate and personalise flamenco. His aim has been to create his own vision of dance: warm, elaborate, conceptual and conceived for a corps de ballet in a stage space.

She owes her knowledge not only to her perseverance, but also to her two great teachers: Matilde Coral, who taught her discipline, technique and passion for dance; and Mario Maya, with whom she discovered the stage by giving her her first professional opportunity in Mario Maya's Company and later in the Andalusian Dance Company.

In May 2001 she performed in the galas of the 'Flamenco viene del Sur' cycle at the Teatro Central in Seville; in March 2002 she performed in the Jerez Festival with Manuel Reyes; in September 2002 she took part in the Seville Biennial with the show 'Orestes en Lisboa' and in April 2003 she participated in the 14th International Dance Day Gala, in which she performed Miguel Hernández's poem 'Desde que el alba quiso ser alba'. Rafaela Carrasco returned to the Jerez Festival in March 2004 as a guest artist with Mario Maya's new company, which premiered 'Un, dos, tres, faaa...'. Weeks later, together with Belén Maya, she premiered the show 'Fuera de los límites' at the Teatro Central in Seville.

Rafaela Carrasco and Madrid
At the age of 23 she moved to Madrid and since then she has worked with prestigious figures and companies. Her work and effort have earned her numerous awards and recognitions such as the Giraldillo for Best Show for Imágenes, 20 años; Giraldillo Special Jury Prize for her role as Artistic Director of the Closing Gala, Giraldillo for Best Choreography and Press Prize for Vamos al tiroteo, which also received the Culture Prize in the Dance category awarded by the Community of Madrid.

And of course, the main prizes in the XI Certamen de Coreografía de Danza Española y Flamenco in 2002, the year that marked the creation of his eponymous company. Carrasco has been apprentice and teacher, dancer and choreographer. She was director of the Ballet Flamenco de Andalucía from 2013 to September 2016.

Currently, she continues on the stage and also teaches international classes in venues such as the Festival Flamenco de Jerez, which opens its 24th edition with her show Ariadna, following the success of Nacida sombra the previous year. Both shows are available to ALL FLAMENCO subscribers.

2010 Giraldillo Award for Best Choreography and Seville Biennial Press Award for the show Amos al tiroteo.
2010 Culture Prize in the category of Dance awarded by the Community of Madrid.
2012 Giraldillo Award for Best Flamenco Ballet of Andalusia for the show Imágenes, 20 años.
2014 Giraldillo Special Jury Prize for her work as Artistic Director of the closing gala at the Seville Biennial for her show La punta y la raíz. A step through the dance of Seville. 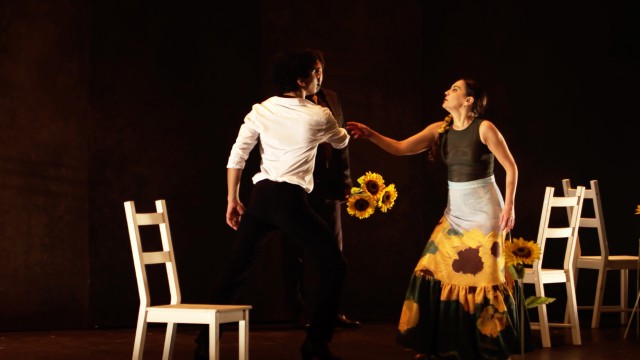